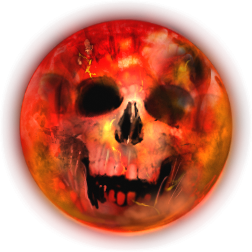 Once a year, Mad King Thorn and his creepy cohorts visit the land of mortals for a spooky celebration with holiday quests, Costume Brawl PvP, Halloween-themed guild vs. guild battles, as well as plenty of other tricks and treats! The frightening festivities begin at 12:00 p.m. Pacific (GMT -7) on October 18 and run until 12:00 p.m. on November 2. The main events take place in Lion’s Arch and Kamadan, but you’ll find Halloween décor in outposts all over Tyria.

More spooky details about the Halloween festivities are on the Guild Wars Wiki! 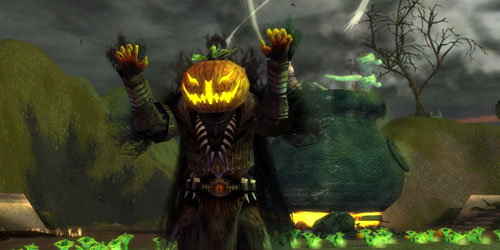 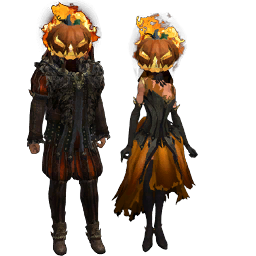 Each Halloween, you’ll be able to acquire a Ghoulish Accessory Token that can be exchanged for a hat suitable to the occasion or a tonic that will make you the afterlife of any party! Speak with either Gul Terror in Lion’s Arch, or Malavaka in Kamadan to get started. Aahtan in Kamadan and Erulis in Lion’s Arch have been entrusted with the actual hats, and they’ll be around till November 8, just to make sure you get your prize.

Capture the gloom and glamour of Halloween by dressing up in costume. The Raiment of the Lich, Lunatic Court Finery, Vale Wraith, and Ravenheart Witchwear costumes are just a few of the costumes available from the Guild Wars store on the web and in-game.

Here are some of the tricks and treats available this Halloween!