In a world torn by conflict, where human kingdoms are all but destroyed and guilds sacrifice all for a chance to control the Hall of Heroes, a champion must rise from the ruins of a once-proud land to lead refugees from the ashes and fulfill an ancient prophecy. Will that hero be you?

Experience the game that has captivated millions of gamers worldwide. Guild Wars® is an online roleplaying game that rewards player skill and innovative gameplay. It's the original smash hit release from developer ArenaNet®, the beginnings of a franchise played by almost four million gamers worldwide. 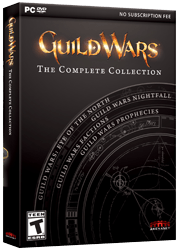 Join the people of Cantha as they prepare a heavenly feast to honor the Celestial Animal of the coming year! This annual week-long celebration features Canthan cuisine, festive fireworks, special prizes, and the famed Shing Jea Boardwalk!